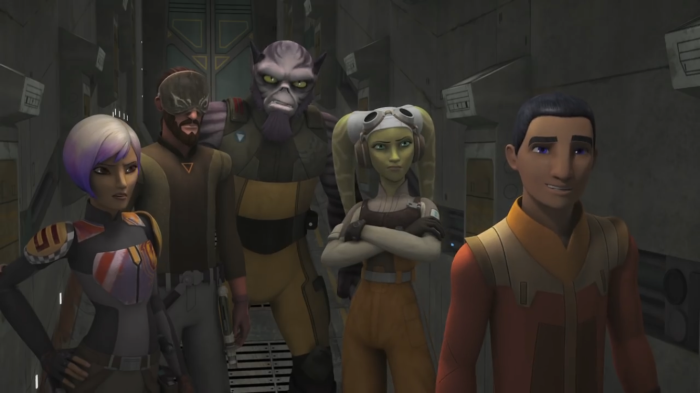 Less than 48 hours remain between us and the debut of Rebels Season Three, but obviously, that’s an eternity in fan time, so let’s keep on talking about what we might expect from the crew of the Ghost.  Today, we’re going to overthink the new appearances of the crew, and if you haven’t yet, check out the Rebels panel from Star Wars Celebration Europe, where Dave Filoni introduced the crew’s new looks and offered a little insight.  Obviously, we’re going to take that inch and stretch it out for a yard.

The most striking change to any of our characters belongs to Kanan Jarrus, mainly because the man had his eyes burned away (never a fun experience) by Darth Maul in the Season Two finale.  A lot of focus has been directed toward’s Kanan’s blindness, be it from Filoni’s own observation that it’s a call back to the blind samurai of Japanese cinematic lore or to the fact it will reduce Kanan’s ability to continue his training of Ezra Bridger.  In myths, heroes are often blinded as a matter of punishment, usually as a result of excessive pride or seeing something they should not have seen.  This is not the case with our Jedi Knight, so the cause for Kanan’s blindness is more likely to serve a purpose towards his own development (not the recommended training regime, FYI). 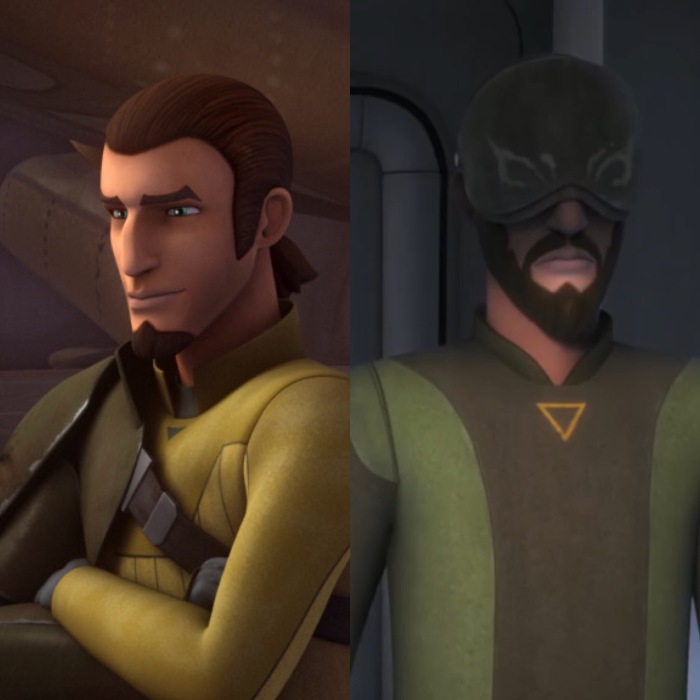 The loss of one’s sight, in this perspective, is often associated with the development of perceiving the world and one’s self differently.  In A New Hope, Luke Skywalker donned a helmet with the blast shield down to learn to perceive the practice drone through the Force and not rely upon his eyes.  In the words of Obi-Wan Kenobi, “Your eyes can deceive you.”  As a result, we should expect Kanan to begin to perceive things on a different level than before, be it Ezra’s dangerous flirtations with the Dark Side or even his relationships with others.  Across where his eyes should be appear to be Mandalorian Jaig eyes, best known from Captain Rex’s helmet in The Clone Wars show.  Jaig eyes were often used as markers (given to others) as symbols of bravery or courage.  One might expect either Rex or Sabine added them to Kanan’s appearance, but it also offers the perspective that Kanan now sees the world through a different set of eyes.  As a practical matter, Kanan’s blindness may also hinder his ability to train Ezra, leading the apprentice to seek education elsewhere.  In addition to the loss of his eyes, Kanan now sports a full beard, which in the dictionary of Jedi appearances tells us can be a mark of having attained greater knowledge and wisdom of the Force.  From Qui-Gon Jin to Obi-Wan Kenobi, beards have been worn by human Jedi who have attained at least the rank of Jedi Knight or higher.  We should expect Kanan to exhibit a deeper understanding or appreciation of the Force.  Ezra’s own advancement is noticeable in his appearance. 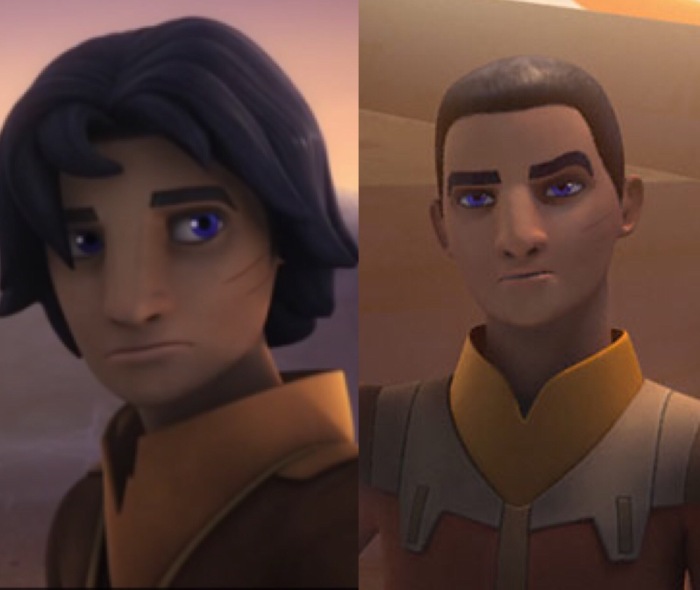 Ezra’s own appearance has subtle indicators about his maturity.  Gone is the somewhat wild hairstyle that would fall across his brow and served, especially in light of his current extremely short ‘doo, as an indicator of his childhood.  Season Three Ezra is much closer to being an adult than the Ezra we knew before, and likewise this adult approach to the world is also defined by his new blaster slung on his thigh.  It, along with his lightsaber, mirror Kanan’s own approach to dealing with problems, but it also is a final step away from the weapon he was introduced with, his stun slingshot.  At the end of Season One, Ezra had combined the stunning ability of the slingshot with his lightsaber, a weapon that ultimately was destroyed in his confrontation with Darth Vader.  The stunning capacity of the weapon, however, offered Ezra a means to a safer alternative than your typical blaster bolt or plunging one’s lightsaber blade into another’s chest.  Now, Ezra favors weapons designed entirely with killing as their primary purpose.  Ezra done gone and grown up, which also appears to have happened a bit more to Sabine Wren. 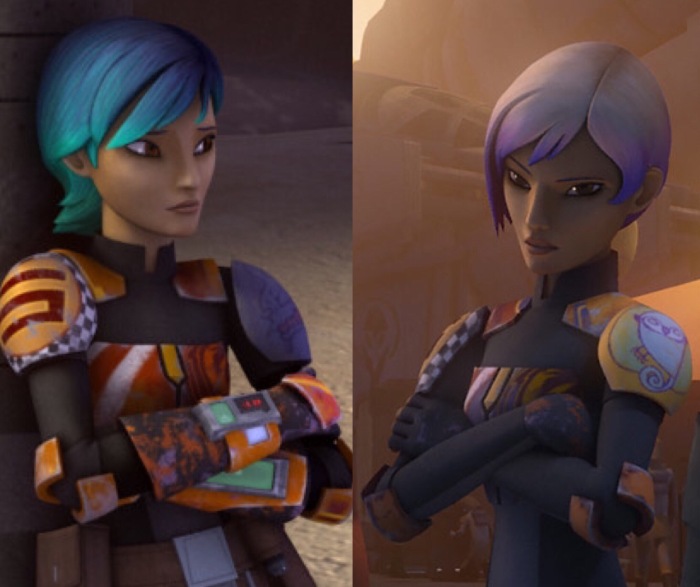 Sabine, already a teenager when we first met her in “Spark of Rebellion,” made a point to cover herself, hair included, in colorful combinations which reflected her artistic rebelliousness. It’s also her hair which implies the biggest change about our favorite Mandalorian artist, having shifted from mainly blue with red highlights to almost entirely white or silver.  In many cultures, white hair often symbolizes someone who has aged (in most cases, grown old), but who have also accumulated wisdom.  Regarding Sabine, we should expect a more mature rebel willing to deal with issues that your typical teenager might simply avoid.  We know from clips and trailers that the new season will explore more of Sabine’s cultural roots, and undoubtedly, her newfound wisdom and knowledge will be put to the test.  Another fascinating addition, in support of this newfound wisdom, is the image of an owl-like creature on her shoulder pauldron.  Owls have long stood as symbols of wisdom, not to mention, jerks who eat one’s Tootsie Roll pops after three licks.

Beyond  the idea of Sabine having gained wisdom, we can make another reading of white/silver hair.  It can be evidence of someone who has been changed by a traumatic event.  In Sabine’s case, there wasn’t truly a character changing moment for her in Season Two, in fact, she was hardly in the season finale.  At best, we can adopt the event to be more her continued struggle fighting the Empire, which is slowly changing the artist we quickly came to love.

﻿The war is also changing another member of the Ghost’s crew, Hera Syndulla, but only in shifting her priorities and elevating her importance to the rebellion against the Empire.  Chronologically speaking, we really meet Hera in John Jackson Miller’s A New Dawn, already stirring up trouble against the Galactic Empire.  In “Homecoming,” we also know that Hera left her father’s side to spark rebellion against the Empire across the stars, not just on Ryloth.  As Filoni pointed out about Hera’s new look, it adopts a more militaristic appearance.  Her flight suit and overalls have shifted into something more akin to a uniform, complete with rank insignia and other accessories.  Already promoted to captain last season, we should expect Hera to take an even greater role in the rebellion against the Empire.  And then there’s Zeb.

While undoubtedly plenty of time will be devoted to our favorite Lasat’s characterization, even Filoni simply remarked his outfit was changed to fall more in line with the appearance of clothing in the original trilogy.  One might consider his new outfit something closer to a uniform, as well, given the two red stripes on his shoulder or the badge fashioned to his right breast.  The two glowing boxes on his belt also seem a bit more militaristic and might indicate Zeb being in possession of a new weapon or tool.  Unfortunately, there’s not much more to be said about Zeb.  Of course, we can’t forget Chopper.

4 thoughts on “Rebels, What’s In an Appearance?”